We Work Hard,
So You Can Rest Easy.

We’re ready to put our years of experience to work to resolve your legal issue.

We will listen to your needs and objectives. As a client, you will stay involved with our team of attorneys throughout the process as we are always accessible when needed. We will use our knowledge and understanding of the law and the legal system to formulate a strategy to achieve a sustainable resolution.

What Our Clients Are Saying

GillespieShields is centrally located near downtown Phoenix, near the important landmarks of the Musical Instrument Museum, Papago Park, and Desert Botanical Garden. Our office is just a few short blocks away from the historic downtown neighborhood, which features many hundred-year-old buildings and extensive high-end retail establishments, restaurants, and entertainment venues.  If you haven’t visited downtown Phoenix, you are truly missing out!

Phoenix acts as the financial, cultural, and political hub of the area as it is centrally located at the intersection of highways 51 and 202, south of Gila River Indian Reservation, and just west of White Tank Mountain Regional Park. It is in the southwestern United States, in the south-central portion of Arizona, and about 16 miles east of the cities of Tempe and Mesa.  Some amazing landmarks in the area include Camelback Mountain, Phoenix Zoo, First Friday Roosevelt Row, and Heritage Square Foundation.
This makes GillespieShields (conveniently located on North 16th Street) a centrally located professional team of attorneys who are equipped with knowledge and understanding of the law and the legal system, can be easily found throughout Maricopa County, including the surrounding communities of Peoria, Glendale, Goodyear, Chandler, Gilbert, Scottsdale, and Morristown, Arizona.

Map to Our Phoenix, Arizona Location 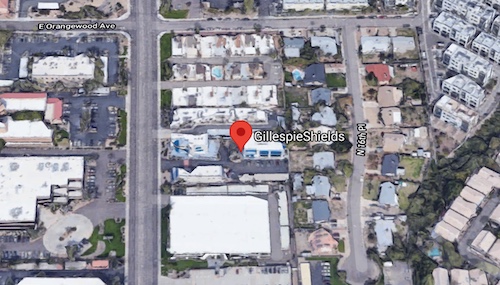 About our Phoenix Location

GillespieShields is the best Family law attorney in Phoenix, Arizona. We proudly offer: