How Much Do You Really Know About Prenuptial Agreements in Arizona?

What Is A Prenuptial Agreement?

Prenuptial agreements are pre-marriage contracts (and equally as powerful) those outline parameters of property distribution in case of divorce or death. They can address financial matters such as spousal support, the disposition of premarital assets, and more.

Preparation is key to successful prenuptial agreements for Arizona residents. A premarital agreement must be fair, so it’s best to come up with a plan before becoming engaged.

How Do I Get A Prenuptial Agreement In Arizona?

One of the first prenuptial agreement questions is how can prenups can be created. The prenup simply needs to include provisions about what the financial arrangements will be in case of divorce or death like any other contract. As with most contracts, there are requirements that prenups must follow when they are drafted and executed.

Can A Prenuptial Agreement Be Modified?

A prenuptial agreement may be modified by the court, but only if there is a substantial change in circumstances that affects or alters the prenuptial agreement. An example of this would be if one party had an increase in earnings which can support more spousal support during divorce negotiations.

Is It Possible To Have The Prenuptial Agreement Terminated?

If you decide at some point that you no longer want to be bound by your prenuptial agreement, there may be legal options available for terminating the contract, if the terms of the contract are met.

As prenuptial agreements are contracts, they can be terminated by agreement of the parties involved or by court order under certain circumstances.

Can Prenups Be Challenged In Arizona?

Yes, it is possible to challenge a prenuptial agreement if the party challenging it believes that certain rules were not followed during its creation or that someone did something wrong when negotiating it or drafting it. This may include failure to give proper disclosure, entering into an arrangement when there was no real intent to create the prenuptial agreement, lack of capacity, lack of knowledge about rights waived in the premarital contract, and mistake. 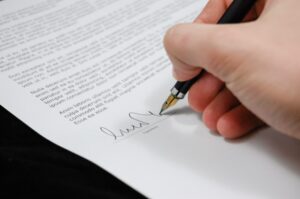 What Should I Do Before Signing A Prenuptial Agreement?

There are some things that you should think about before signing a prenuptial agreement. First, it’s important to have your prenup drafted by an experienced prenup attorney in Arizona. The prenup should be fair to both parties and reflect the circumstances of you and your future spouse. You must fully understand what rights you are giving up, for example, better alimony or property rights.

Second, there are some things that are not allowed in prenuptial agreements. For example, it is illegal for someone to make demands about child support or child custody based on the prenuptial agreement. Also, Arizona does not allow prenuptial agreements after marriage unless both parties agree beforehand that this would apply if they get married down the road. If you do want to include after-marriage prenups, it is recommended to have them written in very specific terms.

Third, prenuptial agreements may not always be the best choice for you. While prenups are usually upheld by Arizona courts, prenups can still go through some complex legal procedures before they are enforced. If you try to break your prenup later on with claims of coercion or duress, Arizona law can view this as ‘bad faith’ and unfair bargaining practices even if the prenuptial agreement is found valid.

The prenuptial agreement is an important document that can help you protect yourself if your marriage doesn’t work out. It’s understandable to have questions about how they work, whether or not it will be possible for the agreement to change, and what should I do before signing one? Give us a call today. We’ll answer all of these questions and more!